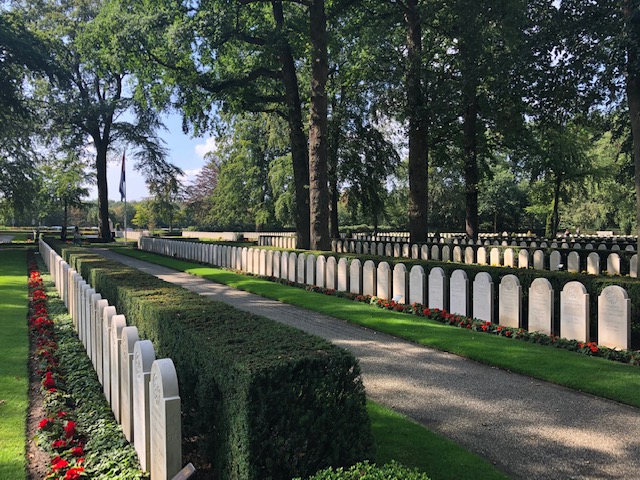 On May 4th, people in the Netherlands pay their respect to all victims who have died in wars or peacekeeping missions since the beginning of Worl War II by a 2-minute silence throughout the whole country.

This year a commemoration with the public is possible again.

Every year at 7:50 p.m., the National Commemoration will take place on Amsterdam’s Dam Square.

King Alexander and Queen Maxima will walk through a veterans’ guard to lay a wreath on behalf of all citizens of The Netherlands. After this ceremony, there will be a 2-minute silence throughout the whole country.

Furthermore, public transport and road traffic will come to a standstill.

The main commemoration will start in the St. Bavo Church at the Grote Markt.

A silent march will start at the church, Riviervismarkt side, and ends at the Dreef. Here, victims of war will be commemorated by laying wreaths at the memorial of ‘Man in front of the firing squad.’

The full program can be found on this website.

One of the many honorary cemeteries can be found in the Kennemer Dunes at the Zeeweg in Overveen.

This cemetery was consecrated on November 27th, 1945, by the reburial of Hannie Schaft, a famous Dutch Resistance fighter.

Three hundred seventy-two resistance fighters were re-buried at this cemetery.

Silent march to the memorial cemetery

From 6 p.m. to p.m 6:40 p.m. a memorial service will be held in the building of ‘Publieke Werken’ on the Brouwerskolkweg in Overveen
This service is open to relatives of the fallen and all who are interested.

6:40 p.m. set up of silent march right after the roundabout, corner Brouwerskolk – Zeeweg.

6:55 p.m. start of the silent march to the memorial cemetery

The silent march is a tribute to the fallen and thoughts about freedom and peace.

Dutch flags will fly half-mast from 6 p.m. until sunset on government buildings. The same rule applies to citizens. For them, this rule is not a directive.

NOS will broadcast the national commemoration ceremony live from 7:50 p.m. on NPO.